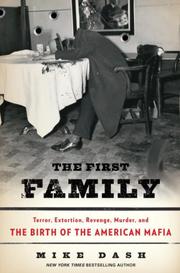 Terror, Extortion, Revenge, Murder, and the Birth of the American Mafia

The Mob comes to America, and rivers of blood flow.

The literature surrounding the Mafia is vast, particularly in the glory days of the 1930s and ’40s, but very slight for the first days of the American mob. London-based journalist and historian Dash (Satan’s Circus: Murder, Vice, Police Corruption, and New York’s Trial of the Century, 2007, etc.) fills the gap with this altogether excellent account, which begins, as always, in Corleone, Sicily. Giuseppe Morello—variously known as “The Clutch Hand,” “Little Finger” and “One Finger Jack”—earned his chops as a mobster, starting off with penny-ante crimes and swiftly working his way up to the murder of a corrupt cop. Things got hot after that, whereupon Morello made for New York and set up shop doing much the same work, then branching out to take part in whatever mischief was afoot. Dash swiftly reviews the reasons why the Mafia evolved in Sicily, and why it was so exportable, noting that local habits of keeping quiet and resisting state power proved helpful in protecting the newcomers from the authorities—even though the metropolitan police soon organized an “Italian Squad” made up of Italian-American cops such as the little-sung Joe Petrosino, murdered on Morello’s orders, and Michael Fiaschetti. Dash’s narrative soon involves Secret Service agents, politicos and ward bosses, minor hoods and ordinary citizens, building toward Morello’s downfall. Hubris and retribution figure heavily, as do a slew of second-generation mobsters who had designs of their own, independent of the old-timers. Dash writes with flair and care alike, taking pains to keep a complicated story and a vast cast of characters on track while studding the tale with nicely hard-boiled observations, including, “The one trait Joe Masseria fatally lacked was a talent for diplomacy.”

Essential for students of organized crime in America. Murder and mayhem buffs will enjoy it too.