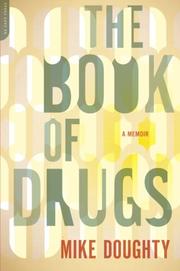 THE BOOK OF DRUGS

The author half-seriously calls his book “just another drug narrative,” and it's true. There’s nothing about Doughty’s longtime love for pot, coke, heroin and Ecstasy that hasn’t already been superseded by hundreds of other rock-star druggies who eventually replaced compulsive drug use with some form of equally compulsive religious behavior. What makes this story tolerable is not his voracious appetite for drugs and groupie sex but rather the mundane facts of his life as a mid-level rock star. Born the privileged son of a West Point–educated military historian, Doughty grew up knowing only a whitewashed suburban existence. He moved to New York City in the early 1990s to become an East Village creative type, putting together what seemed like just another acoustic act playing the NYC club circuit. But within a year of its inception, Soul Coughing got snapped up in the post-Nirvana major-label signing frenzy. The band consisted of Doughty on guitar and vocals and three jazzbo sidemen whose main function seemed to be busting Doughty’s chops for his lack of musical ability. After readers get to know his insufferable band mates, the author’s addiction becomes more understandable. Yet there’s also something desperately exhibitionist about Doughty’s willingness to recount in brutally frank detail even the most miserable experiences with drugs, groupies, itinerant girlfriends and prostitutes. More interesting than the sex and drugs, however, are the poisonous band dynamics that eventually destroyed Soul Coughing. Though Doughty’s inevitable turn to rehab spiritualism is neither interesting nor inspiring, the stories of his exotic world travel—trips to Cambodia and Ethiopia, for instance—offer a few memorable culture-clash moments. Another mostly enjoyable but unremarkable excess-leads-to-the-palace-of-wisdom drug memoir.