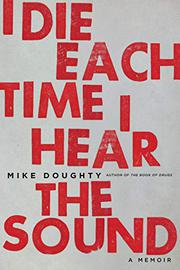 I DIE EACH TIME I HEAR THE SOUND

The former Soul Coughing frontman recalls moments from a musician’s life that are funny, infuriating, or just too strange not to share.

Doughty’s debut, The Book of Drugs (2012), was a relatively conventional addiction memoir, relating how his appetite for narcotics was exacerbated by his status as a famous-ish 1990s bandleader. In this follow-up, the author dispenses with an extended narrative arc and instead constructs the book out of brief anecdotes, some as short as a paragraph, relating tiny epiphanies and disappointments. Many of them turn on the phrase “the world was absolutely new,” usually relating to moments of musical revelation—e.g. hearing Nirvana and the Replacements for the first time or playing with an idol like the MC5’s Wayne Kramer. But Doughty’s earnest proclamations of glowing fandom have a counterweight in his seeming knack for attracting low-grade calamities into his life. There’s the roommate who climbed onto a fifth-story ledge, drunk; the producer of a Soul Coughing best-of album who sowed discord with his estranged band mates; a supposedly game-changing invitation to write a song for an X-Files soundtrack that ultimately fizzled; moments of disorientation in Kyoto, Shanghai, and a Las Vegas strip club’s Champagne Room. It’s all relatively inconsequential stuff in isolation, but Doughty has a finely honed, smirking style of observation that justifies most of the vignettes: The strip club’s bathroom was “as bright and cold as a Whole Foods”; a Tinder date “had written her profile in half-disguised twelve-step argot”; Shanghai’s skyscrapers “look like they were drawn on a coaster.” Together, the book accrues an entertainingly bemused, why-is-this-happening-to-me vibe, and Doughty’s terseness evokes the simple quirkiness of a Lydia Davis short story. Fans will appreciate his stories of struggling to finish his breakthrough solo album, Haughty Melodic, but he’s a talented observer in many contexts.