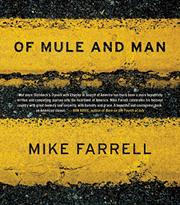 OF MULE AND MAN

The actor best known for his portrayal of B.J. Hunnicutt on M*A*S*H demonstrates that book tours are every bit as tedious as imagined.

In May 2008, Farrell (Just Call Me Mike: A Journey to Actor and Activist, 2007) rented a Prius (nicknamed “Mule”) and looped across the United States on a 25-city book tour. Reading about his cross-country trip is like thumbing through a stranger’s travel diary—it’s chock full of meandering, superficial observations that ultimately don’t add up to much. Even though each event was co-sponsored by individuals or groups dedicated to social justice, Farrell rarely reflects on the progressive nature of his tour—how it was conceived, what he hoped to accomplish, how it could serve as a model for other authors. Rather than weaving his involvement with these organizations into the narrative, the author includes dry summaries of their missions in boxed-off spaces. Moreover, he often undercuts his stance as an activist with his condescending tone. He sneers at right-wing radio hosts and their audiences (“I truly worry about the people who listen to this crap all the time”) and resorts to ad hominem attacks against former President Bush, referring to him as “President Stupid” and a “the pathetic, smirking narcissist who occupies our White House.” The larger problem, however, is that Farrell too often glosses over the unique aspects of his tour. In New Orleans, he met with Sister Helen Prejean, a renowned opponent of the death penalty, and instead of offering vivid scenes or telling anecdotes, he simply notes that they had a “great dinner and wonderful conversation.” In contrast, Farrell dedicates nearly an entire chapter to getting an oil change at a Firestone dealer in New York City. Despite his forced attempts at whimsy—largely through unconvincing conversations with Mule—what his chronicles inadvertently portray is the mundane, repetitive nature of the modern book tour, where authors skip from city to city with little time to explore individual communities or interact with readers.