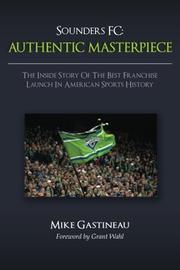 A behind-the-scenes look at the successful launch of a Major League Soccer franchise.

After being founded in 2007 and playing their first game in 2009, the Seattle Sounders have been a model franchise not only for MLS but for sports in general, setting league attendance records and building a uniquely devoted fan base while avoiding the growing pains faced by other expansion teams. As the author writes, before the team was put together, Seattle had just experienced the loss of the NBA’s Supersonics, and “the thought that Seattle, of all places, could be the home of the most successful sports franchise launch in American history was beyond rational belief.” But the Sounders blossomed through the visionary efforts of three men in particular—movie executive Joe Roth, CEO Tod Leiweke and general manager Adrian Hanauer—who recognized the importance of forging a unique relationship between the team and the community. So tight is that bond that after the Sounders once lost badly at home, the team offered ticket refunds to every fan who attended the game. Management also bowed to the fans’ wishes by agreeing not to have Budweiser sponsor the traditional pregame march to the stadium. “In almost every way they forged interactions with their fans that were different from anything that had been seen in American professional sports,” Gastineau says. The author effectively captures the key signings of veteran goalkeeper Kasey Keller and Colombian forward Fredy Montero, who was so young at the time that his first question to management was, “If I go to the U.S., can I get medicine for my acne?” He also details the out-of-the-box contributions of comedian and co-owner Drew Carey, who, among other things, suggested fans vote on whether to keep the general manager in office. “It’s great because the fans are invested in the team no matter what happens good or bad,” Carey explains. The Sounders have yet to win an MLS Cup, but Gastineau has scored with this vivid history.

An entertaining, thoughtful examination that will appeal not only to soccer fans but to anyone interested in the business of sports.