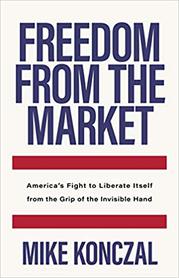 FREEDOM FROM THE MARKET

An economic manifesto on behalf of the 99% poorly served by the present economy.

As economist and journalist Konczal rightly notes, the idea, courtesy of Milton Friedman, that financial markets are self-regulating and that business should take care of business has meant undue hardship for most consumers. Countered by a movement of people, especially younger ones, who are “hungry to reclaim a world outside the market,” the Friedman-esque mantra is increasingly giving way to a different view: Government is understood not to be a bystander in the economy but instead the provider of key services that are now seen as profit centers, including health insurance and education. Market dependency contributes to unfreedom while placing limits and regulations on capitalism enhances freedom. It’s a thoughtful rebuke to “glib libertarian fantasies,” though of course libertarians will decry Konczal’s prescriptions as socialistic. Early on, the author urges that private enterprises be removed from the health care market, whose resources are captured and kept out of the reach of those who most need health care. Conversely, as he observes, under the present economic regime, the “public” has been removed from public utilities, public lands, and public enterprises in favor of an ever smaller elite. This scenario flies in the face of a history that has included such transformative moments as the passage of the Homestead Act, which transferred 10% of public lands to smallholder ownership, and the social insurance program that provided pensions to Civil War veterans and, by 1910, “delivered benefits to more than 25 percent of all American men over sixty-five, accounting for a quarter of the federal government’s expenditures.” Demands for economic reform have been manifested in such things as the eight-hour workday, proving that regulatory limits can work and offering hope for those “people fighting to take back their lives from the market.”

For readers inclined toward democratic socialism, this is a valuable source of support.