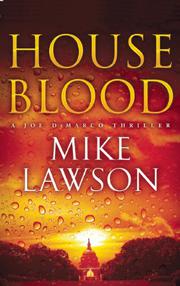 A Washington, D.C., lobbyist is murdered and his partner is framed for the crime. Back for another adventure in congressional fixing, investigator Joe DeMarco untangles a plot involving the deaths of human guinea pigs being used to test a miracle drug.

Orson Mulray, new CEO of Mulray Pharma, is counting on a new drug that can eliminate Alzheimer's disease—and, even more importantly, make his company bigger and more powerful than it was under his unloving and underachieving father. True-believing philanthropist Lizzie Warwick has put her organization at Mulray's beck and call in Peru, not knowing the testing of subjects has led to four deaths—and that the deaths are treated as necessary to the experiments. Her lobbyist discovers the truth but is murdered before he can share it with her. DeMarco, deposed Speaker of the House John Mahoney's go-to guy, is soon pursued by professional killers who learned their tactics in Delta Force. DeMarco's friend Emma, a former intelligence agent dying of cancer, is swept into the plot as well. Her calmly pragmatic response to a violent threat is one of the highlights of the book, leaving us wishing she were in it more. DeMarco is a likable enough character with a good sense of humor, but can't be said to have much in the way of star power. Lawson, a former senior civilian executive for the Navy, is likewise a competent storyteller, but the writing lacks color, and the action never rises above the functional.