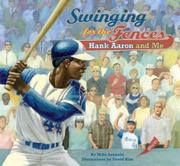 SWINGING FOR THE FENCES

Hank Aaron and Me

Mark always swings for the seats even when a single will help his team. His favorite player is Hank Aaron, who is closing in on Babe Ruth’s record of 714 career home runs. He’s even lucky enough to witness Aarons’s 700th home run and to meet him afterward. Hank kindly imparts some hitting advice, and later sends Mark a book about hitting. At the beginning of the next season, Aaron sets the new record and Mark is there to see it, too. Predictably, even as his hero makes history, his own hitting skills improve, and he becomes a better player. Leonetti sacrifices narrative ease to didacticism, causing Mark’s narration to be generally stilted and lifeless, the only slight exception being the description of Aaron’s record-breaking game. Kim’s bright, double-page spreads add some zest to the text. An afterword that provides biographical information about Aaron contains a puzzling error, stating that the Negro Leagues in 1951 were the only venue for African-American ballplayers even as it trumpets Jackie Robinson’s 1947 entry into the Major Leagues. Disappointing. (bibliography) (Picture book. 8-10)