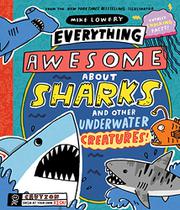 EVERYTHING AWESOME ABOUT SHARKS AND OTHER UNDERWATER CREATURES!

From the Everything Awesome About… series

In the wake of Everything Awesome About Dinosaurs and Other Prehistoric Beasts! (2019), Lowery spins out likewise frothy arrays of facts and observations about sharks, whales, giant squid, and smaller but no less extreme (or at least extremely interesting) sea life.

He provides plenty of value-added features, from overviews of oceanic zones and environments to jokes, drawing instructions, and portrait galleries suitable for copying or review. While not one to pass up any opportunity to, for instance, characterize ambergris as “whale vomit perfume” or the clownfish’s protective coating as “snot armor,” he also systematically introduces members of each of the eight orders of sharks, devotes most of a page to the shark’s electroreceptive ampullae of Lorenzini, and even sheds light on the unobvious differences between jellyfish and the Portuguese man-of-war or the reason why the blue octopus is said to have “arms” rather than “tentacles.” He also argues persuasively that sharks have gotten a bad rap (claiming that more people are killed each year by…vending machines) and closes with pleas to be concerned about plastic waste, to get involved in conservation efforts, and (cannily) to get out and explore our planet because (quoting Jacques-Yves Cousteau) “People protect what they love.” Human figures, some with brown skin, pop up occasionally to comment in the saturated color illustrations. (This book was reviewed digitally with 10-by-17-inch double-page spreads viewed at 45% of actual size.)

An immersive dunk into a vast subject—and on course for shorter attention spans.