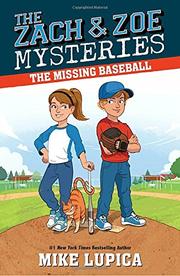 From the Zach and Zoe Mysteries series, volume 1

Lupica kicks off a new series starring a pair of 8-year-old twins who solve sports-themed mysteries.

Even the pleasures of competing in various events during his school’s Spirit Week dim a smidge for Zach Walker when the prized autographed baseball he brings to his third-grade class for show and tell vanishes. Happily, his bookish but equally sports-loving sister, Zoe, is on the case, and by the time of the climactic baseball game at week’s end, she has pieced together clues and deductions that lead to the lost treasure—which had not been stolen but batted through an open window by the teacher’s cat and stashed in a storage shed by the custodian. In the co-published sequel, The Half-Court Hero, the equally innocuous conundrum hangs on the identity of the mysterious “guardian angel” who is fixing up a run-down playground basketball court. Along with plenty of suspenseful sports action, the author highlights in both tales the values of fair play, teamwork, and doing the “right thing.” The Walker family presents white, but in both the narrative and Danger’s appropriately bland (if inappropriately static) illustrations, the supporting cast shows some racial and ethnic diversity.