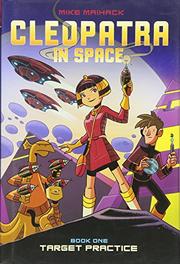 From the Cleopatra in Space series, volume 1

This Cleopatra wasn’t born to rule over Egypt—she has a galaxy to save!

Fifteen-year-old Cleo is playing hooky from her algebra lessons when she stumbles across a mysterious tablet that takes her on a one-way trip to the future. Upon her arrival, she learns that it’s her destiny to defeat the evil aliens who have conquered half of the Nile galaxy. Cleo is remarkably nonchalant about her change in circumstances, though she grumbles about enrolling in Yasiro Academy. “Light years from my home planet, millennia in the future, and a supposed savior of the galaxy… / and I still have to go to school?!” At least the curriculum includes target practice, where her old slingshot skills prove to be transferable. Cleo’s easygoing confidence makes her a likable, if not especially complex, heroine, but the real star of the graphic novel is Maihack’s art. The cinematic paneling during action sequences skillfully conveys Cleo’s vivacity and flair. Moreover, Cleo’s novel surroundings—which include talking cats, ray guns and even a flying sphinx—feel fresh and immediate to readers thanks to Maihack’s character designs and backgrounds, which manage to be winsome without being cloying.