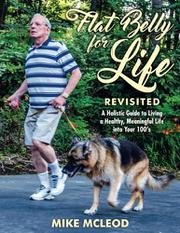 A Holistic Guide to Living a Healthy, Meaningful, Meaningful Life into Your 100's

An eclectic guide to health and fitness for the older set.

When he reached his 70s, McLeod (The Death of Civility and Common Sense, 2016, etc.) noticed that some of his contemporaries had already died but that others had maintained their vigor well into their twilight years. This brief book—part memoir and part self-help manual—discusses the author’s general approach to health and fitness issues but also includes a bevy of digressive detours on several topics, including a dietary cure for snoring, age discrimination, and a condensed history of fitness programs. The core of McLeod’s approach is high-intensity interval training, with a simple diet that largely consists of meat, fruits, and vegetables. He also includes an assessment of the progress that science has made in slowing the physical decline that typically accompanies age; in particular, he focuses on TA-65, a controversial natural compound that advocates say can repair elements of chromosomes that decay with age. The process of introducing TA-65 into the market was difficult, as McLeod relates in detail, noting that the Federal Trade Commission tried to kill its production. The author goes on to provide an overview of the supplements and devices, such as the Apple Watch (referred to here as the “iWatch”), that he’s found to be useful for his fitness. The book offers many little nuggets of counsel regarding topics such as the maintenance of mental health and acuity, and it’s all written in a simple, accessible style. However, it’s poorly titled, as very little of it is actually devoted to slimming one’s abdomen. Also, it has the feel of a long essay that lacks tautness and focus; the author meanders far too freely, as if casually thinking out loud. The majority of the advice isn’t groundbreaking, and much of it is little more than common sense—for example, that people should take care to “get a good night’s sleep.” Many readers will wish that the author had spent more time discussing the Federal Trade Commission’s campaign against TA-65, which is the highlight of the work.

A scattered mix of instruction and self-reflection on a wide range of topics.