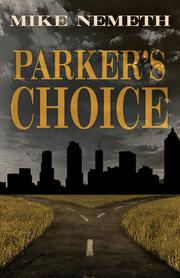 An ex-convict becomes unwittingly embroiled in a fatal shooting and a case of white-collar crime in Nemeth’s thriller.

When John Parker dissolved his business partnership, it almost killed him. Rather, Meredith Walker, his former partner, almost killed him with an attempted lethal double cross. But Parker was the one who went to prison for allegedly shooting Meredith’s accomplice. Three years later, John, a levelheaded, likable lead, is married and working in bustling downtown Atlanta as the head of analytics for an international company. His life is back to normal, and he’s managed to avoid trouble—until Meredith shows up at John’s suburban home. She demands half of the proceeds for the sale of their startup company’s software, but Parker doesn’t have the money. An unexpected gunfight ensues in the yard among Parker, Meredith, and others. After the smoke clears, someone has taken a bullet, and another one of Meredith’s accomplices later turns up dead. Now Parker’s wife, who was armed that night, may face jail time. To add to Parker’s woes, he and his colleague Sabrina Mitchell uncover fraud at their workplace. If they can prove it, they may be able to save hundreds of jobs. Nemeth masterfully weaves the two mysteries together. The murder plot is particularly strong; the deceptively simple bullet-riddled event turns out to have been quite complex. Parker, for example, thoughtfully contemplates everything from shell casings and fingerprints to the distinctive sounds of different caliber guns. These considerations spark lively dialogue, which keeps the pages turning along with abundant plot turns. While the protagonist is memorable, supporting characters, like Sabrina and Paula, also shine. Intelligent, headstrong Sabrina may be even more compassionate about saving those jobs than Parker, and Paula’s alcoholism compounds her paranoid belief that her husband is cheating on her.

A razor-sharp mystery with twists aplenty.