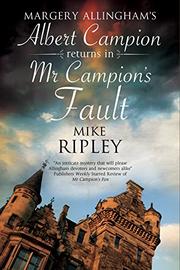 An untimely death summons Albert Campion’s son and daughter-in-law to a boys’ school in the Yorkshire coal-mining village of Denby Ash, where they’re soon followed by their famous father, a relic of golden age detection, and his long-suffering wife.

On his way home from visiting Ada Braithwaite, the cook at the Ash Grange School whose home is being terrorized by a poltergeist, bachelor teacher Bertram Browne is struck and killed by a car that speeds off into the night. Ash Grange headmaster Brigham Armitage reaches out ceremoniously but desperately to his goddaughter, Perdita Browning, not to investigate the death but to replace Browne as producer and director of the school’s ill-advised Christmas theatrical, a performance of Marlowe’s Doctor Faustus with heavy cuts, a brass band accompaniment, and a wordless walk-on for Browne’s sister, Hilda, as Helen of Troy. Oh, yes: Armitage also wants Perdita’s husband, Rupert Campion, to stand in for Browne as coach of the rugby team. Ripley (Mr Campion’s Farewell, 2014, etc.) does almost nothing with the colorful teaching staff at Ash Grange, but Rupert’s news about the haunted house, the local witch, and a wave of well-organized robberies sweeping through the area brings his father down just in time to be on hand when Perdita helps rescue Ada’s son Roderick, her Faustus, from a gang of thugs and Rupert is invited to help DCI Dennis Ramsden with his inquiries. Extricating himself from beneath the watchful gaze of his wife, Lady Amanda, Mr Campion promptly sets off making unauthorized inquiries that bring the case to a highly satisfying conclusion.

The mystery is slight but pleasing, and packing Margery Allingham’s notoriously fey hero, whom advancing age has appropriately subdued, off to Yorkshire is an inspired coup, tapping effectively into the class conflicts that power the story.