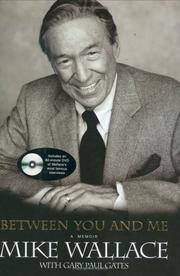 BETWEEN YOU AND ME

The 60 Minutes warhorse, now 87, recounts his most memorable interviews.

Wallace again teams up with Gates, his collaborator on the 1984 memoir Close Encounters, for this look back at an impressive 60-year career in journalism. In chapters including “Presidents,” “Icons and Artists” and “First Couples,” interview excerpts are interspersed with commentary from Wallace. While the writing is straightforward as it can be, the man has met enough notable people to make the book fascinating. Wallace applies a light touch when discussing chief executives, trying to find the good in irascible characters like Nixon and LBJ (Wallace recalls that LBJ once forced 60 Minutes producer Don Hewitt, his passenger, out of a car on his Texas ranch to pick up a candy wrapper and then drove off). He also gingerly handles icons like Martin Luther King Jr. and Malcolm X. But in two standout chapters, “The Middle East” and “Con Men and Other Crooks,” Wallace’s needling style is on full display. The title, in fact, comes from the conspiratorial phrase he uttered to elicit a startling on-camera confession from Chicago crook Phil Barasch. Among the more amusing exchanges here is that between Wallace and Salvador Dalí. When Wallace asked him why he adores old age, the painter responded, “Because the little young peoples completely stupid, you know.” Wallace admits that it was years before he realized “how profoundly wise” Dalí was on the subject of age.