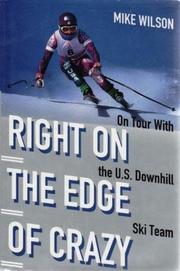 RIGHT ON THE EDGE OF CRAZY

On Tour with the U.S. Downhill Ski Team

The 80-mile-an-hour exploits of the US Men's Downhill Ski Team propel this bracing report from Miami Herald staffer Wilson (coauthor, Maximum Morphonius, 1990). Granted unusual access to the day-to-day lives and thoughts of the defiantly ``not normal'' bunch he dubs ``the U.S. Crazy-Ass Get-Out-Of-My-Way Downhill Maniac Team,'' Wilson traces the mostly grueling, often frustrating, and occasionally elating 1991 and 1992 World Cup (or, more aptly, ``White Circus'') seasons. Far from glamorous, despite such glittering surroundings as KitzbÅhel, Val d'Isäre, and Garmisch, the tour, with only one US stop, appears as a grind of unforgiving slopes, jet lag, bad food, poor accommodations, and harrowing rides on narrow mountain roads—all compounded by virtual neglect from the American press. Along the way, there's a lackluster performance in the Albertville Olympics;, the rare racing-related death of an Austrian downhiller; the quiet retirements of two team members who have lost ``the edge''; and the rise of AJ Kitt as an international star. Frequently injured and constantly mired in a battle between fear and the ecstatic pursuit of self-propelled flight, the racers—including Kitt, Tommy Moe, Jeff Olson, Bill Hudson, and Kyle Rasmussen—along with their dedicated, sometimes exasperated, coaches, emerge as compelling, fully realized characters. Skirting none of the rivalry, casual profanity, and youthful high jinks of the tour, and particularly strong on the technical aspects of the sport, Wilson offers a graceful yet rollicking narrative that goes past the warts-and-all mode to create a vivid picture of a world dedicated to controlled excess. An invigorating, world-class ride down some tricky and rewarding terrain.