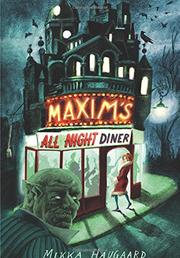 Annabel’s curious about witches; will that be the end of her?

Annabel’s writing a book about witches. The white Londoner wants to know everything about them. When she meets Patrick, a green-haired white boy, on the top deck of a double-decker bus, he informs her he can tell her everything about witches—but it’ll be dangerous. Annabel’s still eager; he takes her down a street she’s never seen even though it’s near where she lives and introduces her to his mother, Mrs. Rainbow. They take her to Maxim’s All Night Diner, where all manner of strange creatures gather and trade stories. There, Annabel learns she’ll have to tell a story, and she may be trapped in that story (especially since Mrs. Rainbow has cursed her for saying “please,” which witches cannot abide). After several wild tales, it’s Annabel’s turn. Will she survive? Haugaard’s self-consciously whimsical debut is a meandering and, at times, nonsensical muddle. The stories-within-a-story conceit gets away from the author early, due mostly to tricky use of punctuation conventions. Stories are initially introduced as spoken dialogue but then lose their quotation marks, presumably to make it clear when characters within them are speaking, but they are so short and dialogue tags elided often enough that readers may find themselves confused as to which story they are in. Poor copy editing compounds the confusion.

Too twee for its own good.