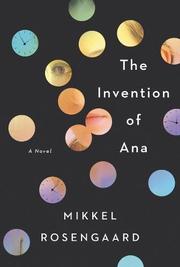 THE INVENTION OF ANA

A would-be writer from Copenhagen meets a performance artist from Romania and becomes obsessed with her tragic, surreal life story.

As the unnamed narrator explains in the first pages of this novel, already nominated for a “best debut” prize in the author’s native Denmark, he met Ana Ivan shortly after he arrived in New York. He’d come over to work as an intern for his brother, a successful gallerist, and that night was helping out at a Brooklyn art festival. Anna immediately began telling him a story from her past, about a game she'd played with her father as a child during the endless, boring power cuts of the Ceau?escu regime. They made dots on a paper at random, then stared at the dots until a picture emerged. This is a metaphor for the novel as a whole, the dots being stories from Ana’s life, this being the first of many. The next time he sees Ana, she tells him about a time she pretended she had a stomachache to avoid going to school and ended up dead for two minutes during an unnecessary appendectomy. “Why aren’t you writing it down?” she asks impatiently. “It was only the first chapter.” Her plan, it seems, is for him to become her amanuensis, writing “the whole true tale” of her life, a story she suggests may have bestseller potential. Though he finds the situation “implausible”—“how often, after all, do you meet a random woman and end up being asked to write her life story?”—he has no stories of his own. After all, he’s “just an intern—white and middle-class and male to boot.” And so, her story becomes his story. Much of it revolves around Ana's father, a math prodigy who committed suicide for reasons that were obscure until she herself became a mathematician and began to investigate her parents’ past. The bizarre tragedy they suffered had many long-range consequences, including Ana's convictions that she is cursed and that she can travel through time.

This strange story about strange stories, told with intelligence and humor, lingers in the mind like a dream.