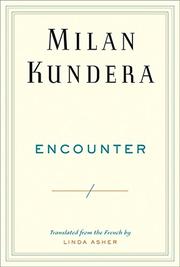 A collection of essays, book, music and art reviews, ruminations and recollections by the celebrated Franco-Czech novelist (Ignorance, 2002, etc.).

Kundera's mind is an expansive forest, and he visits many trees in these pieces, some more than a dozen years old. In some cases he writes about painters, musicians and novelists whose names and works are widely known (Céline, Philip Roth, Beethoven, Breton). Elsewhere, he expatiates about the creations of artists whose identities are known principally by the cognoscenti, companions and countrymen. The latter include the music of Iannis Xenakis, the paintings of Ernest Breleur and the writings of Danilo Kis. Regardless of the subject, Kundera's prose glows, sometimes in sufficient strength to illuminate even the most obscure of his subjects. The pieces all share a compression of style—his few words say much—and even some experimentation. In an essay on painter Francis Bacon, for example, he alternates 1995 observations with what he had written initially in 1977. (He employs a similar strategy later in a piece about Xenakis' music.) Kundera writes with passion about what he views as the foolishness of surrendering a friendship to political differences, and he snarls about the deleterious influence of film and television in a piece about the 100th anniversary of the motion picture, which he labels “the principal agent of stupidity” in the world. The author marvels about the Allied occupation forces after World War II, especially the Americans, who seemed so sublimely confident in their divine election and sanction. Continually, he revisits the hopeful Prague spring of 1968 and its hideous aftermath and agrees with Czech writer Vera Linhartova, who wrote how exile can be transformative for an artist. He chides biographers who are enraptured with the sex lives, and even body odors, of their subjects, and he wonders about the artistic portrayal of the ugly.

Shows that bright shards of clear prose can serve as windows into the unknown.