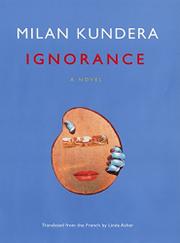 Czech émigré Kundera (Identity, 1998, etc.) returns to Prague for this hodgepodge of romance, history, and philosophy.

Kundera has long since morphed into a kind of Czech Woody Allen, writing novels about neurotic characters falling into impossible love affairs while the narrator diverts himself with highbrow musings on fate and history. The odd couple this time are Josef and Irena, each returned to Prague after more than 20 years’ exile to see what it has made of life after Communism. Irena has lived in Paris since 1969, and wasn’t especially eager to go back—her French friends had to persuade her to return, partly because her Swedish lover Gustaf recently set up a business in Prague. Josef is returning from Denmark, where he’s lived also since the 1960s. The two were young and inexperienced lovers then, in the Prague Spring that nearly toppled the Party—and led eventually to their emigration. Both married abroad, but both spouses have now died. Back again, Irena finds little that’s appealing: The city is gray, her old friends foreign and distant. Josef finds that his older brother, once a Party stalwart, has adjusted to the new order and become an entrepreneur. Together, Josef and Irena try to discover what they lost when the Soviet invasion forced them apart in 1968, but their old love seems to have become as distant and alien as the city has. As usual, the author fills out the story with reflections on Schönberg, the Odyssey, and philosophy (“Memory cannot be understood, either, without a mathematical approach. The fundamental given is the ratio between the amount of time in the lived life and the amount of time from that life that is stored in memory”), which are diverting in their way but also distracting.

An honorable failure: Kundera’s taking himself too seriously is offset by his ability to change the subject again and again—though, at end, nothing adds up to much.