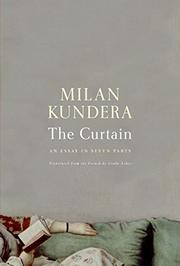 An Essay in Seven Parts

A celebrated Franco-Czech novelist considers the history of the novel and worries about its future.

Kundera (Ignorance, 2002, etc.) begins by observing that there were no novels until stories began to have aesthetic value. One of the novel’s principal functions, he claims, is to explore the prose of life. “All we can do in the face of that ineluctable defeat called life is to try to understand it,” he writes. Kundera repeatedly considers literary history, and he shows how the past has influenced the present. Don Quixote, Tom Jones, Madame Bovary, Anna Karenina, The Trial, Ulysses—these and other celebrated works are mined throughout for their explanatory and illustrative riches. Kundera believes that readers of literature must be readers of comparative literature: to read only those works that mirror your own culture and language is to intentionally blind yourself. Kundera alludes to novels and novelists from all over the word (though most are European men). He explains the title of his book in its fourth section: Novelists must devote themselves to “tearing the curtain of preinterpretation.” This section also features something of a rant against pop fiction; Kundera labels “contemptible” those writers who create repetitive fictions that deal with the ephemeral. In later sections, he offers some insights on the pervasiveness of human stupidity and bureaucracy, and he ends with eloquent passages about our separation from the past—how forgetting and memory, which transforms rather than records, make more difficult the novelist’s task.

On bright display are Kundera’s vast reading, his passion for his art and his disdain for the ordinary.