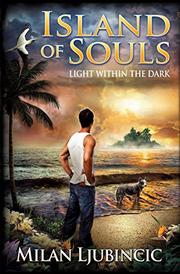 Light within the Dark

In Ljubinic’s debut novel, a tormented man seeks solace on what he believes is an uninhabited island, only to be greeted by a host of strange characters.

Lucas is an esteemed psychologist with a dark history. In addition to constantly grappling with memories of an unstable childhood, he also faces the more recent tragedy of divorce. His overwhelming feelings of disillusionment prompt him to sail to Palmyra Atoll, a series of Northern Pacific islets, to take a break from humanity and find himself. Soon after he sets foot on Palmyra, however, his dog, Blue, finds a strange man collecting crystals in an island cave. Lucas is skeptical of the stranger, but Edmond’s humbling presence eventually wins him over. In no time, he introduces Lucas to the rest of the island’s inhabitants: a captain, an old woman and a shaman. Lucas is intrigued by them all, and he treats them as guides to help him navigate the island and pursue his quest for inner peace. Although Lucas is happy, he senses something eerie about his surroundings. The islanders’ histories don’t seem to fit together, although each is seemingly content and provides invaluable words of wisdom. Despite his wariness, Lucas allows himself to let go, to drink in life and overlook trivial discrepancies. Ljubinic’s tale of travel and soul-searching has a powerful message: The mind has the power to create the world one lives in, or as the shaman so eloquently puts it, “We become what we think about.” The entire book is filled with similarly inspiring dialogue; indeed, some exchanges between the characters are deeply profound. Although a work of fiction, this parable’s underlying message can be taken to heart by anyone who reads it. Perhaps as a simple reminder, the author notes in an epigram, “We sometimes need the darkness to remind us of the light.”

A fine allegorical novel that may make readers feel refreshed and ready to take life by the reins.