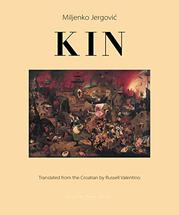 Vast, generous-spirited story of family across the face of the 20th century in the turbulent Balkans.

“Around the subject of my elder uncle there was silence.” So writes the prolific Bosnia-born Croatian journalist, novelist, and poet Jergović at the beginning of this epic. That silence, born of an accident of history and bloodlines, surrounds much of his family in this blend of memoir and fiction. (It is seldom clear where fact shades into invention.) The uncle’s maternal grandfather, Jergović’s great-grandfather, was an ethnic German who spoke only German to his children, and although his Croatian and Slovene sons-in-law spoke German fluently, he spoke to them only in their languages. Fastidious about his Germanness and the difference of others, that great-grandfather nonetheless stood alongside Jews, Turks, Croatians, Hungarians, Bulgarians, and all the other diverse people who made up the population of Sarajevo; during World War II, when those ethnic distinctions were made matters of life and death, he sheltered his neighbors from the Croatian fascists, the Ustaše, “not primarily because he was a good and unselfish man, but because they were an important part of his own world.” In short, Opapa couldn’t imagine a monocultural life. Jergović himself, old enough to remember life in socialist Yugoslavia before it splintered in civil war, recounts being breastfed at birth by “an unknown Muslim woman,” further evidence of universality in a time of ethnic hatred. Jergović’s pages are peppered with walk-ons from Bosnian, Serbian, and Croatian history, such as a feared interrogator who, after retiring, “had a small house with a large garden full of roses, which he cared for himself, breeding some and buying others from various parts of the world.” Even monsters, it seems, are susceptible to beauty. There is beauty aplenty, and ample monstrosity, in Jergović’s account, as well as many moments of mystery: a beekeeper’s coded journal, the alpenglow that surrounds Sarajevo as surely as a besieging army, the “living torment” that is existence, all come under Jergović’s empathetic eye.

A masterwork of modern European letters that should earn the author a wide readership outside his homeland.