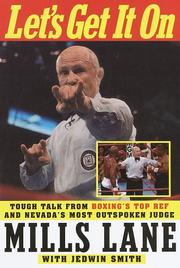 LET'S GET IT ON

by Mills Lane with Jedwin Smith

Known to non-boxing fans as the fight official who witnessed Mike Tyson make a meal of Evander Holyfield’s ear, Lane has also made quite an impression outside the squared circle as a pugilistic district judge in that law-and-order mecca, Nevada. Here he takes his trademark phrase, “let’s get it on,” sincerely—and some would say disconcertingly—to heart. Lane holds forth on a variety of topics, including affirmative action, parenting, race relations, individual responsibility, boxing, and, in light of his forthcoming syndicated television program, celebrity. A former marine, Mills applies what he learned as a raw recruit to virtually every facet of his life. In court, his tough, no-nonsense, and occasionally expedient approach to crime and especially punishment (he is outspoken in his defense of both capital punishment and the Second Amendment) earned him the sorbiquet “Maximum Mills.” But the real source of Mills’s fame is his actions in the ring as a prize-fight ref, and thankfully, that’s where he confines most of his narrative. Praised within the boxing world for his integrity, Mills delivers some devastating blows to the sport, rightly taking it to task for being run by ruthless and greedy flesh peddlers. He also comes to the defense of the unsophisticated or punch-drunk boxers on whom promoters and managers regularly prey. Oddly, Lane professes his admiration for the business acumen of the man acknowledged by most to be the worst of the breed, boxing promoter Don King. Perhaps a stand against convention is the sort of thing that endears people to this latter-day frontier legend in the first place. In his final chapter, Lane delivers a listing of his “top ten fights” that accomplishes in a few pages what some ring scribblers take whole volumes to do. Quite impressive. Some engaging and provocative bluster from a man who calls ‘em as he sees ‘em, in life, in the ring, and in the courtroom.