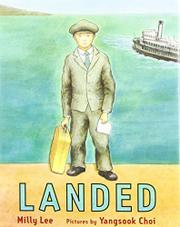 Drawing on the reminiscences of her father-in-law, Lee details 12-year-old Sun’s emigration to San Francisco from China in 1915. Sun’s father, a merchant with a U.S. business, informs Sun that he will join his brothers, studying and working in America. Sun’s tutor painstakingly prepares him for the challenges of immigration. Because of the Chinese Exclusion Act, Chinese immigrants, many of them boys, were detained on Angel Island, awaiting hours of interrogation about the minutiae of their families and villages. Officials sought inconsistencies exposing “paper sons”—boys posing as the offspring of U.S. citizens or merchants. Though a “true son,” Sun worries that his poor sense of direction will cause him to answer incorrectly. Lee’s narration of Sun’s weeks on Angel Island—waiting, befriending two paper sons, and enduring the grueling interviews—is plain and measured, reflecting the serious burden Sun withstands. Choi’s full-bleed and spot illustrations employ muted greens and ochres to depict village scenes, the sea journey and the detention center. This testament to the pull of “Gold Mountain” offers a bit of Chinese-American history in a handsome package. (author’s note) (Picture book. 7-11)