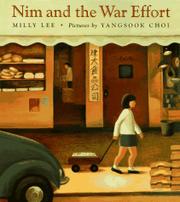 NIM AND THE WAR EFFORT

The recycling of paper is not new, nor is racism. This book explores both in the historical context of San Francisco's Chinatown during WW II. Nim is competing in a school newspaper drive to help the war effort. In her free time she scouts out the neighborhood for more paper, red wagon in tow, and runs into her closest competitor, Garland Stephenson. He's not above stealing a pile of papers left for Nim by her aunt, taking new papers from a vendor, or ridiculing Nim by saying that the winner of the competition will be an American, and ``not some Chinese smarty-pants.'' Nim almost gets the last laugh when she discovers a motherlode of newspapers in a garage in Nob Hill, and calls the police to deliver them to her school. However, her discovery makes her late getting home, and she is reprimanded by her grandfather. Nim's close relationship and respect for her grandfather temper her pride in her success. The muted colors of the illustrations and the unhurried beginning create an intimate, if slow-moving, story. What separates this story from simple nostalgia is Lee's close recollection of details—the scarcity of newspaper during the war years, or the flag pin worn by Chinese-Americans (so they would not be identified as ``the enemy''—the Japanese). All these details place the affecting story in a real, not idealized, America. (Picture book. 6+)