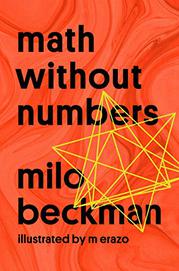 A math prodigy examines how mathematicians view the world.

Math enthusiasts have a spotty record explaining their favorite subject to a popular audience, even when they exert themselves to hold attention with calculating tricks, paradoxes, or illusions. Beckman, who entered Harvard at age 15, eschews them all, maintaining that everything—“plants, love, music, everything”—can be understood in terms of math and proceeds to explain how mathematicians try. They love to overthink things. “We take some concept everyone understands on a basic level, like symmetry or equality, and pick it apart, trying to find a deeper meaning in it.” His first example is a simple concept: shape. By the mathematical definition, a square and a circle have the same shape, but a figure 8 is different. It turns out that thinking about shapes is a major field of study called topology. Beckman admits that this has no practical significance, but it’s odd and interesting, and most readers will agree. There seems little to say about infinity, but this turns out to be wrong and pleasantly bizarre. If you remove any number of marbles from a bag containing infinite marbles, what’s left is still infinite. Adding one or 1 trillion—still exactly infinite. Infinity times infinity…the same. Is any quantity more than infinity? Yes; it’s called the continuum, and Beckman offers a fairly clear explanation. Ultimately, the author argues that math is not about numbers or equations but models. A model breaks down phenomena into specific rules that, when applied, explain it. A few simple rules produce a quasi-game remarkably similar to Darwinian natural selection. Beckman concludes with a model of an empty space containing 17 particles that follow well-defined if absurd rules, but the end result is the “standard model,” physicists’ best interpretation of how the universe operates.

A pleasant, amusing look at mathematics as a description of everything.