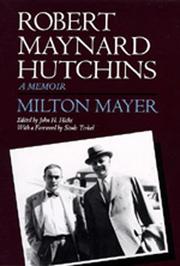 A biography/memoir of the extraordinary Hutchins—educational reformer, administrative genius, Great Books mentor, academic freedom-fighter, and liberal polemicist—that was edited by Hicks (formerly, English/UMass at Amherst) from 900 pages of a working draft left by Mayer (If Men Were Angels, 1971, etc.) at his death in 1986. Following two years each at Oberlin College, in the Army, and at Yale, Hutchins was appointed at age 23 to the daunting position of Yale's administrative secretary. Though he graduated from the university's law school in 1925 and taught law for two years, he hadn't even taken the bar exam when he was named dean of Yale Law in 1927. And he topped that by becoming president of the University of Chicago at the age of 30. As Mayer repeatedly notes, Hutchins felt he was a failure at most things and, despite his reforms and innovations and his astonishing fund-raising ability, ``never did get the college he wanted.'' As the force behind the controversial ``Hutchins Plan,'' which would evolve over his 26 years at Chicago, he revitalized undergraduate programs by taking them out of the hands of graduate assistants; battled specialization and departmentalization in favor of an idealistic university of interrelated studies; amazingly, convinced the school's governing board to drop intercollegiate football; instituted comprehensive degree-examinations for students who felt they were ready; and fashioned a modern pass/fail system. Throughout his tenure, Hutchins taught a history of ideas course that led to his chairmanship of the Great Books Foundation and, later, his stewardship of the Encyclopaedia Britannica. As founder of the Center of the Study for Democratic Institutions and president of the Fund for the Republic—a powerful anti-McCarthy organization- -Hutchins's influence was felt, and his wisdom sought, from the classroom to the Oval Office. Mayer (for decades an aide and ``hired hand'' to Hutchins) does his old friend justice in this admiring but critical biography. (Sixteen illustrations)