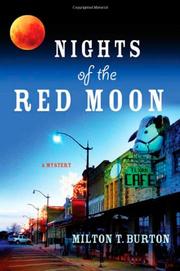 NIGHTS OF THE RED MOON

A debut for a small-town Texas sheriff who keeps the peace in his own empathic way.

Bo Handel has been sheriff in Caddo County, Texas, for 30 years, which is certainly remarkable given the offhand way he got the job. It was sort of bequeathed to him by the outgoing sheriff, who reckoned he’d be good at it. Not having much else on his plate at the time, Bo signed on. Caddo County citizens, or at least its law-abiding component, have been counting their lucky stars ever since. Modest in size though it is, Caddo County is no sleepy hollow. Its natives inflict bodily harm on each other with considerable regularity, just as someone did to Amanda Twiller, the young and restless wife of Reverend Bobby Joe Twiller. Someone pumped three bullets into her pretty chest, launching—thinks Sheriff Bo, with the fatalism born of hard Caddo County peacekeeping—what the local Cherokees called “the Season of the Blood Moon…a time of madness and death.” Suddenly, Bo finds himself facing a homicidal downpour. Not only that, but there’s a pesky influx of out-of-town wise guys who seem to be on a vendetta. Could it all be connected to the late, randy Amanda Twiller? Hard to believe.

Maybe a twist or two too many, but tough, smart, endlessly compassionate Sheriff Bo is the kind of stalwart hero who can anchor a first-rate series.