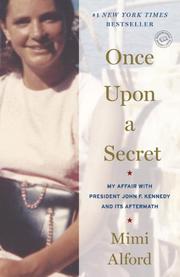 ONCE UPON A SECRET

Kiss-and-tell memoir about the author's affair with President John F. Kennedy, beginning when she was a White House intern in 1962.

Alford describes life as a debutante and the import her parents placed on The Social Register. In 1961, as a high-school senior at Miss Porter's School in Farmington, Conn., she attempted to set up an interview with one of the school's alumna, Jacqueline Kennedy, then the First Lady. Her request was declined, but she was nevertheless invited to visit the White House. There she was introduced to JFK, whose charisma struck her at once. The following year she was offered a summer internship in the White House press office. On her fourth day, Alford writes, she received a phone call from one of JFK's closest aides, Dave Powers, asking her to come for a swim in the White House pool. As she swam in a borrowed suit, the president appeared and asked to join her. That evening, the president offered the star-struck 19-year-old a personal tour of his residence and, in Mrs. Kennedy's bedroom, deflowered her. Alford is adamant that their sex was consensual, yet other aspects of their affair, which lasted from June 1962 to November 1963, bordered on brutish. The author describes two instances in which the president urged her to service other men sexually and another involving his insistence that she take amyl nitrite. Alford also discusses how she joined him on trips around the country, where they met for trysts in hotel rooms. The rest of the book is light on personal revelations and salacious details, but its subject alone should be enough to guarantee bestseller status. The first half, which unpacks her affair, is far more compelling than the second, which tracks the author's life after JFK’s assassination.


BOOKS ON THE KENNEDYS:

ONCE UPON A SECRET
by Mimi Alford
Nonfiction

JOHN F. KENNEDY AND THE RACE TO THE MOON
by John M. Logsdon
Nonfiction

MRS. KENNEDY AND ME
by Clint Hill
Nonfiction