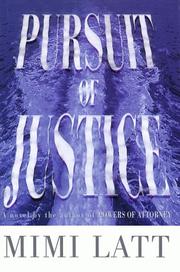 Ho-hum woman-in-peril yarn from former L.A. lawyer Latt (Powers of Attorney, 1993). Ryan Morland, the rising-star partner in a politically well connected Los Angeles white-shoe firm, disappears from the deck of millionaire landowner Paul Worthington's yacht during a seemingly standard fundraiser. When his soggy corpse washes up, the cops, of course, call it a suicide, and members of Morland's firm eagerly concur with that conclusion, citing an enigmatic suicide note and an unconvincing paper trail suggesting that Morland might indeed have been taking big private dips into the petty cash supply. Morland's widow Rebecca, a legal-aid lawyer who's pregnant with her first child, can't believe that her moody husband would have just checked out without telling her a thing, especially after they had so lovingly decorated the future baby's room together. Shortly after Rebecca refuses to turn over her husband's briefcase to Catherine Dennison, Morland's vampish partner, not only is Rebecca's house burgled, but the crooks swipe Morland's computer hard drive and his backup disks. Could these events have anything to do with Morland's previous investigations into Paul Worthington's background? And what about Diana Worthington, Paul's trophy bride, who's so concerned that her husband will discover her extramarital affairs? Could others also want her husband dead? Namely, Brandon Taylor, a decorous rainmaker pining for a US Senate seat; John Evans, his scheming nephew; or Maxwell Holmes, the narcissistic political consultant? Despite the campy dialogue and howlingly trite asides (bitch-queen Dennison notes that the sexual athletics of her Italian stallion lover ``had a sense of playfulness too, which was rare in a lawyer''): a soap opera as dull as dishwater.