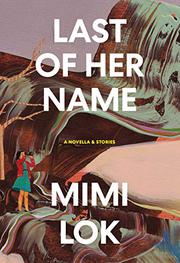 LAST OF HER NAME

This intelligent debut collection of short stories features Chinese people around the globe struggling to connect with those closest to them.

Many of Lok's stories unfold in a series of juxtapositions; it's up to the reader to make connections between the different lives portrayed. For example, in "Last of Her Name," a Chinese girl in England dreams of living heroically like the martial artist protagonist of her favorite TV show while, in a series of flashbacks, the reader sees her mother struggling to survive in Hong Kong under Japanese assault during World War II. In "The Wrong Dave," a Chinese man in London strikes up a heartfelt email correspondence with a young woman in Hong Kong. He met her several years ago at a wedding, and when he gets an email from her out of the blue, seeming to pick up a conversation in the middle, he doesn't tell her he thinks she's sent her email to the wrong person named Dave. As he prepares for his wedding, he feels more emotionally open with her than with his own fiancee. A young woman in California cannot fathom her globe-trotting brother's joyful rootlessness in "Bad Influence." And in the novella The Woman in the Closet, an elderly homeless woman in Hong Kong moves into the closet of a busy, lonely young man and secretly insinuates herself into his life, taking over for his negligent housekeeper and his emotionally distant girlfriend. A few stories are more experimental in form: For example, one moody story, "Accident," lasts only two pages, and "Wedding Night" unfolds for stretches in a series of single paragraphs, one per page, relaying images and poetrylike moments in the characters' lives. Are disconnection and loneliness inevitable side effects of modern life or of living in diaspora? These stories raise intriguing questions but do not attempt any simple answers.

These eight stories highlight the lives of lonely people with empathy.