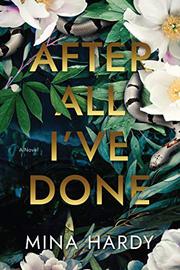 AFTER ALL I'VE DONE

A middle-aged woman sidelined by a horrific accident finds even sharper pains waiting on the other side of her recuperation in this expert nightmare by Hardy, familiar to many readers as Megan Hart, author of All the Secrets We Keep (2017), etc.

Five months ago, while she was on her way to the hospital with an ailing gallbladder, Diana Sparrow’s car hit a deer on a rural Pennsylvania road. When she awoke, she was minus her gallbladder, two working collarbones (and therefore two functioning arms), and her memory. During a recovery that would’ve been impossible without the constant ministrations of Harriett Richmond, the mother-in-law who’s the real reason Diana married her husband, Jonathan, Diana’s discovered that Jonathan has been cheating on her with her childhood friend Valerie Delagatti. Divorce is out of the question: Diana’s grown used to the pampered lifestyle the prenup she’d signed would snatch away from her. Every day is filled with torments. She slips and falls in a pool of wine on her kitchen floor she’s sure she didn’t spill herself. At the emergency room, her credit card and debit card are declined. She feels that she hates oppressively solicitous Harriett but has no idea why. Her sessions with her psychiatrist fail to heal her rage at her adoptive mother, an addict who abandoned her then returned only to disappear again and die an ugly death. Even worse, her attempts to recover her lost memory lead to an excruciatingly paced series of revelations. Val says Diana asked her to seduce Jonathan. Diana realizes that Cole, a fellow student in her watercolor class, isn’t the stranger she’d thought he was. Where can this maze of deceptions possibly end?

One of those rare thrillers whose answers are even more scarifying than its mysteries.