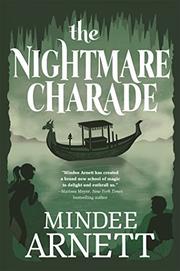 From the Arkwell Academy series, volume 3

After a summer apart, Dusty is thrilled to see her dream-seer partner and romantic interest Eli Booker. But because of a curse foreseen by Lady Elaine, chief adviser to the Magi Senate, a network of school officials and gruff security personnel is deployed to keep their relationship strictly business. Adding to the frustration and confusion, Dusty's mother—usually haughty and self-centered—is desperate and on the run after being accused of a murder Dusty is certain she didn't commit. Meanwhile, the clandestine Dept. of Intelligence for Magikind Secrecy recruits Dusty and Eli to recover a stolen magical artifact called the Death's Heart under a magically binding nondisclosure agreement with uncomfortable, though harmless, tongue-tying effects. Like its two predecessors, this volume hits all the notes of a magical boarding school adventure: secret identities, classroom mishaps, betrayals, after-hours high jinks, and mortal peril at the hands of a spell-wielding megalomaniac. Some storylines come with a few too many twists and turns, but the climactic scene delivers tension, romance, and a resolution that satisfies.