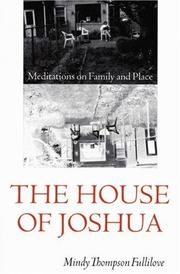 THE HOUSE OF JOSHUA

Meditations on Family and Place

A radiant and insightful collection of personal essays which meditate upon the importance of place in the development of character. Fullilove (a professor of psychiatry and public health at Columbia Univ.) is interested in exploring a psychology of place. Beginning from geographer Anssi Paasi’s notion of place as the personal assimilation of location and event, she wishes to understand the dynamics of the situations we find ourselves in at various stages of our lives. Each of her essays is an exploration of how close friends and members of her family have been affected by their physical surroundings—in both nurturing and disruptive manners. The essays range from her father’s realization of the importance of regrouping his base of political power in the black ghetto of Orange, N.J. (after his fall from the national labor union movement during the era of the McCarthy hearings), to the sense of desolation she experienced when the home of her close childhood friend was razed to make way for a new East-West Freeway. In another essay she tries to unravel how important a sense of belonging to a certain place was to her four children—three of whom experienced the psychic dislocation of being placed in foster homes before coming to live with her. The voice of her essays remains consistently gentle and understanding, even when she is describing her own personal pain at being made to leave her favorite school as a child to serve as a sacrifice in the school integration movement. In keeping with the spirit of the collection, she often draws upon examples from children’s literature to support her themes; she quotes liberally from such sources as The Chronicles of Narnia, The Boxcar Children, and Tennyson’s The Idylls of the King. The overall effect here can only be described as motherly. A literary antidote to the displacement and upheaval of modern life as we go crashing headlong into the new millennium.