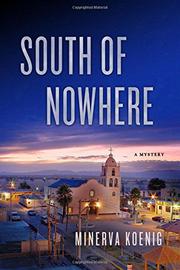 A woman with a rough past and an iffy future fights inner and outer demons.

Back in California, Julia Kalas laundered money for her husband. When he was killed by the Aryan Brotherhood, the witness protection program sent her to Azula, Texas. Kicked out of the program during her last adventure (Nine Days, 2014), she nominally works in the bar owned by her lover, Hector Guerra, but her main interest is renovating old buildings. Trouble comes her way when she finds a body under the floor of her most recent renovation job. Nine months earlier, Hector had taken off for Cuba with ex-sheriff John Maines, a private investigator who returned alone and now wants Julia to help him trace a woman who’s gone missing in Mexico, where she went for lap-band surgery. Since Julia’s on the chubby side, she’s perfect to go to the clinic as a prospective patient. She refuses to help until Police Chief Benny Ramirez starts looking at her as a suspect in the case of the dead body on her job. Though she’s worried because she blanks out and loses moments of time—her doctor wants her to see a shrink for possible PTSD—she takes off with John, his dog, and all her money, planning on losing herself in Mexico. Once she has a chance to look the clinic over, it’s clear something’s very wrong there. The missing girl may be just one of many murder victims, a series of crimes ignored by the government. Back in Azula, Julia makes the Most Wanted list, and things get a lot worse in border country, where it's impossible to know whom to trust. She discovers that Hector is back from Cuba, Maines is almost killed, and her past catches up to her in a meeting with the alcoholic Apache mother she hasn’t seen in years. Julia faces death on a daily basis as she attempts to get answers to many questions.

Koenig’s second is a breathless dash from start to finish. Tough, prickly Julia is a noir heroine sure to take a prominent place among female detectives.