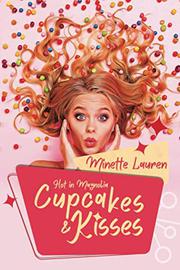 A perpetually single middle-aged woman is suddenly pursued by two supremely eligible bachelors at once in this cheery romantic comedy.

Melvina Banks was fat in high school. Her mother left when she was young. After a lifetime of feeling like nobody’s first choice, Melvina cannot understand why anyone in her small town of Magnolia, Texas, would be interested in her for anything more than the pastries she loves to bake. Melvina tells herself she is content with her life as it is. She works at her father’s diner, does charity work in town, spends time with her best friend, Mona, and regularly saves money so she can one day open her own bakery. When celebrity chef Riley Nash comes to town for a fundraiser, Melvina is eager to meet him so she can get pointers on opening an eatery. To her surprise, this wealthy, handsome man takes an immediate shine to her. Melvina at first resists him, wondering if she’s imagining his interest. Yet Riley continues his pursuit. Making matters more complicated, Manny Owens, the town fire chief and Melvina’s longtime crush, suddenly seems to notice her, too. Before long, Melvina finds herself exploring relationships with both of these guys, inevitably bumping into one of them every time she goes on a date with the other. In short order, she will have to decide whose declarations she trusts and what will truly make her happy. Full of slapstick humor, ranging from chocolate fountain disasters to mishaps with manure, the novel feels upbeat throughout. Although the text is generally wholesome and lighthearted, there are multiple explicit sex scenes that are so at odds with the good-clean-fun vibe of the other portions of the book as to make the reader cringe. The first book in the author’s planned Hot in Magnolia series, this plot-driven novel would have benefitted from additional details about the setting to help the reader feel more grounded in the nonstop action. Even so, Lauren (Race for the Sun, 2018) manages to create a feel-good tale with engaging questions about the essence of self-confidence, romantic love, and self-determination.

A comical love triangle in small-town Texas makes for a quick, uplifting read.