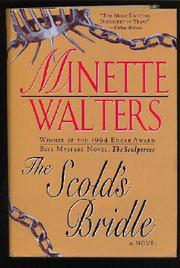 Dr. Sarah Blakeney, the physician who's attended caustic Mathilda Gillespie for the past year, is shaken when her patient is found dead in her bathtub, doped with liquor and barbiturates, wrists slit, and an elaborate cast-iron gag, the scold's bridle, carefully arrayed with flowers and clasped over her face. But Sarah, unhappy in her own domestic life with her husband, Jack, a brilliant, unsuccessful painter, has no idea how close to home this calamity will strike. When Sarah tells Jack she wants a divorce, genre-wise readers will settle back in anticipation of a running analogy between Mathilda's savagely miserable life—she was impregnated by her idiot uncle when she was 13—and Sarah's present woes. They're in for as big a shock as Sarah when a videotaped last-minute will names her as sole legatee at the expense of Mathilda's beautiful, parasitical daughter, Joanna Lascelles, and her sulky, thieving granddaughter, Ruth. Suddenly the police are cordially interested in Sarah, the Lascelleses coolly enraged at her, charming Jack (who's gone to stay with Joanna while he paints her portrait) a mass of outrageous contradictions, and Mathilda desperately enigmatic. As all the principals begin sensitively, articulately, to torment themselves and each other with their guilty suspicions, Walters (The Sculptress, 1993, etc.) draws out the complications with a master's hand until the monstrous pattern is completed with a final sickening jolt. The combination of surgical precision and ferocity will leave you gasping. Those with a taste for the deceptively civilized British whodunit will find Walters the most exciting discovery in years. ($50,000 ad/promo; author tour)