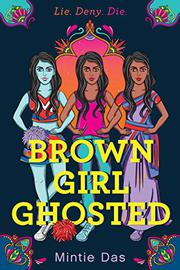 When the school bully is murdered, Violet Choudhury is tasked with finding her killer.

As one of the few kids of color in her small Illinois town, Violet works hard to blend in. She’s an expert at flying under the radar, joining the right clubs, maintaining the right grades, and staying on powerful mean girl Naomi Talbert’s good side. But despite pretending to be ordinary, Violet has a secret life: She’s a descendant of the Aiedeo, Assamese warrior queens. For years, the ghosts of her ancestors trained her in their ancient, supernatural techniques by putting her through a series of deadly tests of strength and will. In seventh grade, after almost dying, Violet refused to continue with her lessons. But when Naomi is murdered the Aiedeo tell Violet that it’s up to her to find the culprit, a ravenous demon. Violet wants to refuse, but if she doesn’t find Naomi’s killer, the Aiedeo will kill her so her powers can’t be taken over and used against them. Das (Storm Sisters: The Frozen Seas, 2017, etc.) deftly weaves an intricate and believable set of parallel worlds, expertly using Violet’s relationship with the Aiedeo and her own powers to explore tough issues of racism, misogyny, and sexual assault. Unfortunately, the prose is often heavy-handed and preachy, and the characters lack much development until the final quarter of the book.