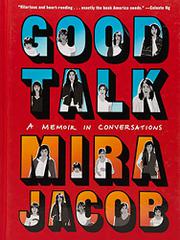 A Memoir in Conversations

A novelist explores the perils and joys of parenting, marriage, and love in this showstopping memoir about race in America.

When her 6-year-old, half-Jewish, half-Indian son, Z, started asking complicated questions about Michael Jackson's skin color, Jacob (The Sleepwalker's Guide to Dancing, 2014) faced the challenge of being honest about racism in America without giving him answers that might be too much to handle at such a tender age. The result is this series of illustrated conversations between Z and the author, by turns funny, philosophical, cautious, and heartbreaking. "Every question Z asked,” writes Jacob, “made me realize the growing gap between the America I'd been raised to believe in and the one rising fast all around us.” These reflections compelled the author to excavate her formative years in New Mexico and, later, in New York as a young writer struggling through her 20s. Jacob grew up navigating a constant stream of expectations from her parents, who emigrated from India to the American Southwest in the middle of the civil rights movement. Particularly moving are the chapters in which Jacob explores how even those close to her retain closed-minded and culturally defined prejudices. With grace and honesty, the author chronicles how she navigated the racist assumptions of an employer and dealt with Indian relatives who viewed her as "a darkie" with no marriage prospects as well as the devastating decision of her Jewish in-laws to vote for Donald Trump. "I feel awful," Jacob explained to her husband. "I feel like they've abandoned me." The memoir works well visually, with striking pen-and-ink drawings of Jacob and her family that are collaged onto vibrant found photographs and illustrated backgrounds. Occasionally the author reuses a drawing to spectacular effect, as when the faces of a white boyfriend and colleague from her past show up in a collage about the responses of white Americans to Trump’s candidacy. Told with immense bravery and candor, this book will make readers hunger for more of Jacob's wisdom and light.

The visual echoes between past and present make this extraordinary memoir about difficult conversations all the more powerful.