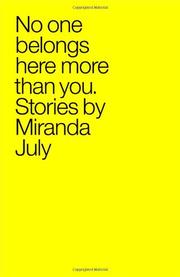 NO ONE BELONGS HERE MORE THAN YOU

July wrote, directed and starred in the indie film Me and You and Everyone We Know, and the same slightly anguished humor informs these stories, peopled by misfits and loners not quite apprised of their own lowly status. The characters interact tentatively, inappropriately. They are dangerously lonesome people (despite their naïve attempts to connect) who have a lot of awkward sex. In “The Sister,” an old bachelor is fixed up by fellow factory worker Victor. Victor’s sister Blanca is always just out of sight, misses dates, becomes the stuff of mythology between the two men—until it becomes clear on a drugged-out night what Victor’s intentions really are. The longest of the collection, “Something That Needs Nothing,” follows two lesbians after high-school graduation as they run away to Portland, Ore. There they rent a cockroach-infested studio and try to find work, preferably one servicing an older woman willing to support them. Things don’t work out quite so dreamily, as one girl abandons the other to earn a living at Mr. Peeps Adult Video Store and More. “Mon Plaisir” traces a couple’s decline from passionless (including some of the saddest sex possible—he “nurses” her while she masturbates) to mute, as they find they like each other more when they get work as extras in a movie. There are a number of evocative short pieces—a woman teaches some seniors how to swim, a teacher believes her teenage poltergeist lover has taken the form of one of her Special Ed students, a woman who has had a port-stain birthmark removed from her face wonders if her husband would love her if she still had it. The stories have an otherworldly quality, but instead of being fantastical, they are emblematic of a modern loneliness in which the boundaries of normal behavior become useless, where the best that can be hoped for is a kind of aggressive voyeurism.