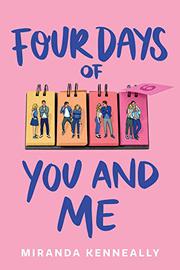 FOUR DAYS OF YOU AND ME

Sparks fly at the beginning of freshman year on election day as they compete for class president. But they become sworn enemies when vegan Lulu gets back at Alex, who won, for refusing to support her cause for a school garden—a moment she regrets when she realizes how much it hurts him. Alex gets his revenge by using presidential privilege to suggest that they go to a science museum for their freshman class field trip, knowing Lulu would hate it. Their romance blooms when they unconvincingly get stuck in the museum escape room and share their first kiss on the same day. From jealousy to first-time sex to respecting each other’s aspirations (Lulu is a graphic novelist, and Alex hopes for a baseball scholarship to avoid working forever in his family’s restaurant), their relationship throughout high school is anything but smooth. The narrative is mostly linear, alternating between four years of annual school field trips and flashback chapters that fill in the gaps. Supporting characters are two-dimensional and conveniently coupled up—the lack of single, independent characters throughout is unfortunate. Lulu is cued as white, and Alex is Greek American; Lulu’s best friend is gay, and there is some ethnic diversity in secondary characters.