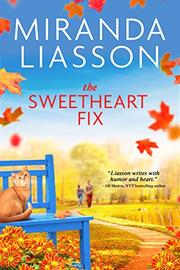 In the second installment of Liasson’s Blossom Glen series, a bighearted therapist and a reluctant mayor clash and then fall in love.

Juliet Montgomery and Jack Monroe are “fixers” by temperament and reputation. Juliet has started a marriage and family therapy practice after years of study inspired by a bout with serious depression as a teenager following her father’s death. The only problem is, her fellow townspeople of Blossom Glen, Indiana, are aware of Juliet’s multiple broken engagements and are reluctant to accept relationship counseling from her. Meanwhile, Texas transplant Jack has successfully become Blossom Glen’s mayor, leaving behind his dreams of a career as an architect in order to help the beloved grandmother who raised him. However, Jack’s people skills are severely lacking. When a suddenly underemployed Juliet stumbles into a town meeting and helps Jack resolve several conflicts among Blossom Glen’s quirky and spirited residents, Jack decides to employ her as a temporary “town counselor” while he tries to save his grandmother’s land from the Omnibuild corporation. Soon, a coworking relationship becomes much more, but Juliet has resolved to curb her emotional spontaneity and Jack is wary of getting serious owing to trust issues stemming from his mother’s abandonment and his father’s unreliability. Can Juliet and Jack make it work and help preserve Blossom Glen? This series entry is a quintessential small-town romance that provides gentle humor and strong character development in abundance. Both Juliet and Jack are intelligent, accomplished, and deeply sympathetic to their friends’ and loved ones’ needs; in Juliet’s case, those loved ones include her sisters Tessa (the pastry chef protagonist of 2022’s The Sweetheart Deal, now happily married and pregnant) and Vivienne, who’s newly returned from Europe and working at a Christmas store while figuring out her life. The novel’s heat level doesn’t rise above kissing, but the chemistry between Juliet and Jack is palpable, whether they’re butting heads over town politics or eating ice cream on a dock. Juliet is also appealingly devoted to guiding others through mental health issues.

A fresh rom-com with small-town charm and sparkling main characters.