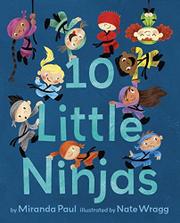 The familiar ditty about little monkeys jumping on a bed is reimagined with a racially diverse group of 10 children going to imaginative lengths to resist bedtime.

Sneaking out of their room to indulge in a variety of lively games, they are repeatedly rounded up by their Daddy and Mama (who are ambiguously tan and dark-haired) before everyone finally collapses into peaceful slumber. Unfortunately the text lacks finesse (“6 rowdy cowboys lassoing the rails—one loop swooped and, whoops!, it failed”), featuring word choices that feel contrived (“8 rapid racers revving out the gate—one left late and couldn’t drive straight!”). It is Wragg’s cheery illustrations in rich jewel tones that steal the show. The children’s bright, cartoonlike faces are expressive, and their costumes—the tigers and dragons, in particular—are truly adorable. The 10 scenarios described are ethnically and culturally nonspecific (astronaut, pirate, firefighter) with the notable exception of the first, ninja. It is portrayed via a bewildering miscellany of Asian props: the tree pose from Indian yoga, karate outfits, and a conical straw hat of the variety favored by rice farmers. The text here refers to the mother as “sensei,” and she is subsequently described in the context of the other scenarios (pilot, sheriff, etc.), a choice that may initially confuse children.