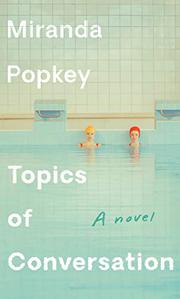 An unnamed narrator navigates female identity—her own and in general—through a series of conversations that span the course of 20 years in Popkey’s painfully sharp debut.

Popkey begins in Italy. Our narrator, a grad student in English, is spending August on vacation with a more glamorous friend’s family, earning her keep minding their 7-year-old twins. One night, the mother, an Argentinian psychoanalyst, recounts her own romantic history, a lesson in the gendered dynamics of power. But what captivates our narrator is the woman’s certainty, her belief in her own story. “I, at twenty-one, did not, had not yet settled on the governing narrative of my life. Had not yet realized the folly of governing narratives,” she recalls. This is the question that propels the novel; it is a book of ideas—about power and gender, about desire, about loneliness and rage—but it is also, at its core, a novel about storytelling, about the quest for a stable narrative that can explain us to others and to ourselves. Ten years later, at an art exhibit in San Francisco—the work is by a Swedish video artist whose subject is “female pain”—our narrator and a friend discuss heartbreak with detached cruelty. This is the underlying premise of their relationship, that they are both bad people; or at least, that is the story they tell themselves and so the story that unites them. Two years after that, in Los Angeles, divorced, the narrator is armed with another story to explain her behavior to herself: “that I have been, that I continue to be, best at being a vessel for the desire of others.” The first sections of the novel are incisive, often biting, but mannered, as though the narrator’s own oppressive self-consciousness has rubbed off on the prose. But halfway through, at a mommy group in Fresno, the novel takes a turn, going from cool to coolly wrenching, as Popkey layers something like tenderness.

A rich and rigorous dissection of how we construct who we are.