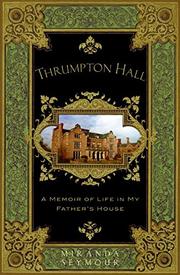 A Memoir of Life in My Father’s House

Seymour (The Bugatti Queen: In Search of a Motor-Racing Legend, 2004, etc.) recalls her idiosyncratic father and the unbreakable bond he formed with his country estate.

Located in Nottinghamshire, Thrumpton Hall once belonged to Lord Byron. Young George Seymour, who spent a year there with his childless aunt and uncle when his parents were dispatched to a diplomatic post in Bolivia, was the first child to have lived there in 300 years. Though the Byrons never suggested he would inherit it, the boy vowed Thrumpton Hall would one day belong to him. His daughter’s lively recollection of George’s love affair with the house includes candid reflections on the trials of taking over such a grandiose building, as well as some beautifully descriptive details. Her chronicle of young George’s discovery of the Hall’s hidden spaces, shown to him by a kindly electrician in 1927, is among the book’s many highlights. But the real interest lies in Seymour’s account of her parents’ relations with their daughter and each other. She wonders whether her father married her wealthy mother for the money. Their engagement occurred as the Byrons were considering selling Thrumpton Hall, and later in life George formed close, possibly homosexual bonds with two local men. The author speculates on her father’s overwhelming fondness for these characters, which included sharing beds with them. She records some strained remarks on the topic from her mother but doesn’t draw any firm conclusions. Interjections from the guarded but always beguiling Rosemary Scott Ellis Seymour make a lively addition to the text; she seems to be constantly looking over her daughter’s shoulder as Seymour writes, offering a crusty running commentary. The story takes a sad turn toward the end, as George’s obsession with his house is ultimately overshadowed by an even greater fixation on the ill-fated Robbie.