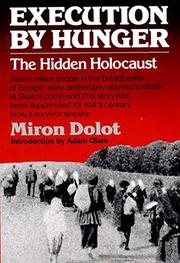 EXECUTION BY HUNGER: The Hidden Holocaust

It's startling in 1985 to come upon an eyewitness report of the forced collectivization of Russian agriculture in 1929-31, and the ensuing famine in the Ukraine--and one does wonder at the detailed reconstruction of scenes and conversations that Dolot (b. 1916) manages after more than 50 years. It's also regrettable that there is no introduction to put this horror into perspective: the untutored reader would not know that such collectivization took place throughout the USSR--making Dolot's step-by-step account the more valuable--or that starvation occurred largely in the Ukraine, where nationalism reinforced farmer opposition to Soviet policy. But there's no gainsaying the force of Dolot's unadorned farm-boy testimony--so like latter-day accounts of Maoist exhortation-and-coercion (only more cruelly punitive), and so unlike privileged White Russian lamentations. We hear of the advent of the ""Thousander"" Zeitlin--one of 25,000 urban Communists sent to collectivize farm communities--and his propaganda team, who don't know a calf from a colt. The first ""kurkuls"" are arrested, and transported to their deaths: the start of what history knows as the elimination of the kulaks, or rich peasants. (Dolot, whose uncles perished this way, denies the designation.) The village is divided into Hundreds, Tens, and Fives; and at marathon meetings, the farmers are intimidated into ""voluntarily"" joining the collective. Rather than openly dissent, they support resolutions, applaud speeches. The first to sign become functionaries, competing for sign-ups. Excesses bring purges, scapegoating of Jews, a confused respite--but the process is irreversible. HIS village, says Dolot, was completely collectivized early in 1931. Then the second struggle, for grain, began. . . that would culminate (after two years of adverse weather conditions also) in the mass starvation of the winter of 1932/33. Dolot's small family survived because his mother cannily buried small stores of grain on unsearched State-owned land; he tells of skeletal beggars and mounds of bodies, of suicide, cannibalism, house after house a tomb. ""It finally became clear to us that there was a conspiracy against us: that somebody wanted to annihilate us, not only as farmers but as people--as Ukrainians."" That, too, is the historical pronouncement on Stalin. Not new knowledge--but a chilling close-up of the process.