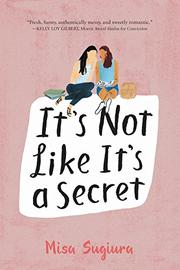 Sugiura debuts with an angst-y coming-of-age narrative set at the intersections of identity, family, and first love.

Sixteen-year-old Japanese-American Sana Kiyohara doesn’t like to rock the boat, biting her tongue over such secrets as her resentment of her conservative and casually racist mother, her suspicion that her father’s in a yearslong affair, and an unrequited crush on her white childhood friend Trish. Things change, however, when Sana’s father moves the family from predominantly white Wisconsin to much-more-diverse California. Sana finds a world of camaraderie as she becomes friends with Vietnamese-American Elaine and Hanh and Chinese-American Reggie and bonds with (and eventually dates) Mexican-American and fellow poetry nerd Jamie. But finding support and unburdening some secrets only leave room for those left unspoken to grow, and soon Sana’s suspicions about her father and the flawed logic of her mother’s worldview spill over into her other relationships until she is confronted with just how much she does not know. The graceful complexity of this first-person narrative is an accomplishment in itself. Sana is a fully realized protagonist with faults and unacknowledged privilege alongside her nuanced experience of identity and “model minority” racism. Sugiura thoughtfully explores intersecting issues of race, immigrant-family relationships, queer romance, and, less explicitly, class dynamics without implying the significance of one over the others.