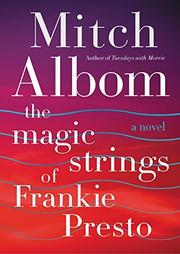 THE MAGIC STRINGS OF FRANKIE PRESTO

At the funeral of guitar superstar Frankie Presto, who disappeared at the peak of his fame, the Spirit of Music looks back on his life from his birth in a church during the Spanish Civil War to his years as “the next Elvis Presley.”

In Albom's latest mystical tale (The First Phone Call from Heaven, 2013, etc.), Francisco's mother dies after giving birth. The newborn is rescued by a nun, but she’s soon overwhelmed and, Moses-like, casts him adrift in the Mijares River, where he's found by Baffa Rubio’s hairless dog. Rubio later runs afoul of Franco’s thugs, and Francisco, only 9, is smuggled from Spain on a tramp freighter by El Maestro, his blind guitar instructor. In London, surviving as a busker, Francisco meets Django Reinhardt when the legendary guitarist is on his way to play with Duke Ellington in America. Francisco travels with him, his talent soon to earn international acclaim. Though a guitar virtuoso, Francisco neglects the beloved instrument to become a pop star, joining the glitterati. The moral? "Fame is addictive." Over decades, Francisco meets a litany of musicians, including Roger McGuinn, Burt Bacharach, Tony Bennett, and Paul Stanley of KISS, who reminisce in separate chapters while Music (imagine James Earl Jones reading poetry) spins out Francisco’s life story. There are occasional odd descriptive phrases like "with hair the color of dark grapes," but Albom can elicit tears when he writes about loss, and he has fun with you-are-there butterfly-effect anecdotes, as when Francisco tells Hank Williams not to buy a baby blue Cadillac, the car in which he would ride to his death.

"All lonely roads lead back to Music" in this sentimental journey that might be a mashup of the lives of shooting stars like Bobby Darin or Ricky Nelson.