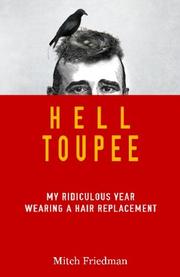 A self-conscious funnyman recalls the series of stressful misfortunes that caused his unflattering hair loss.

Brooklyn comedian Friedman (Totally Tuneless, 2014) first noticed his thinning hair in the early ’80s after a succession of tragic events rattled his life. The domino effect of his parents’ bitter divorce, a breakup, and turning 30 all contributed to the author’s ever-expanding bald spot. Lamenting the incremental loss of what was once a “clownishly large natural...Jew-fro,” Friedman appealed to “Head Restart for Men.” The $1,500 treatments involved a series of visits to a Manhattan clinic where a toupee-like “hair system” was glued to Friedman’s head. A droll comedy of errors began at his office as the paranoid author was scrutinized by critical co-workers; then there was a snafu involving the clinic applying the wrong hairpiece to his scalp, adding insult to injury. Readers will sympathize with Friedman as he attempts to work his way up the New York improv comedy circuit with classes and auditions, only to be stymied by the daily high-maintenance routine required by his hair treatment. Interesting though unevenly distributed, Friedman’s book (its title is a classic Simpsons pun) is padded with anecdotes on his post-collegiate years traveling Europe, writing song lyrics, and looking for a girlfriend. As his stage star rose, Friedman eventually dispensed with his “pseudo-hair,” ushering in an epiphany that dissolved his insecurities and made room for personal renewal. He adds warmth and depth to eloquent details of a Jewish upbringing influenced by his father, an enthusiastic, egotistical salesman with a comb-over and an infectious sense of humor. Aside from baseball, a youthful obsession with Charlie Chaplin fueled Friedman’s interest in live-performance theatrical roles, which also offered a creative distraction from his embittered, divorcing parents. During his first years at college, his bald spot began spreading as Friedman experimented with marijuana, first love, and a disastrous attempt at selling Electrolux vacuum cleaners

Takes a light, self-deprecating approach, injecting some comic relief into a calamitous experience with hair loss.